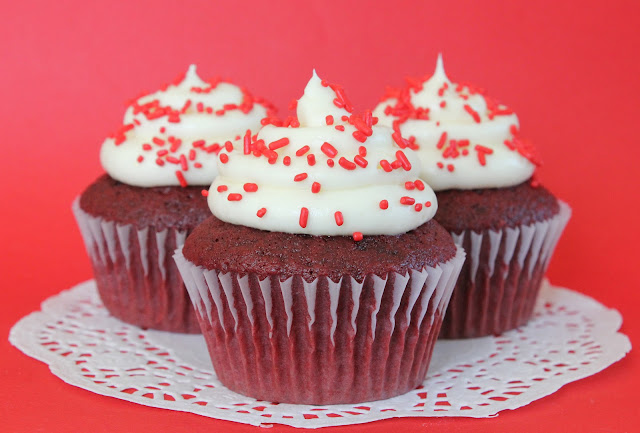 Well hello there, I'm back! I took an unintentional summer break from blogging. Why you ask....well my oldest took a trip to Nana's, my younger two some how caught a nasty staph infection, potty training, schedule, computer crashed, and then I decided to run away to France for a week long getaway in solitude. Ok maybe not the last one but a girl can dream right. Seriously though, it's been crazy around here. A computer crash to a blogger is devastating! Our desktop was as slow as a snail and impossible to function on. So we took the dive we'd been considering for awhile and completely went Apple! New mac, router/hard drive and iPads....which don't get me wrong I LOVE our new setup...but even though I consider my self semi computer savy it's like learning to ride a bike a whole different way. All the tricks and habits of using a PC for two decades really throws you for a loop. But I'm quickly adjusting and really, really loving it. So for today I finally took the time to figure out how to load/edit/post pictures so I could get back to blogging!

Enough techie talk....ready for some sweets? Today I'm sharing a new product from our friends over at Duncan Hines, new Decadent Red Velvet Cupcakes.....with frosting! Yep, the frosting mix is in the box and even a pastry bag! These little babies are kinda special to me because I was actually able to try these out during my trip to Duncan Hines and they were so kind to send a box home with me. I saved it of course until it hit shelves so I could share it with you! (which was two weeks ago but hey I was having a rough time remember) 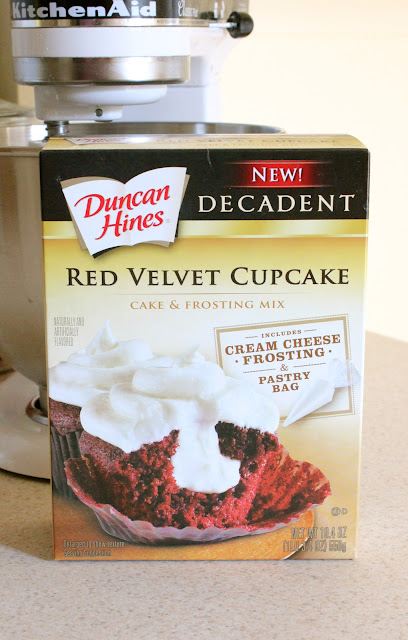 So last week I had the perfect chance to try it out when I realized at 9 am I was suppose to send dessert to the Hub's office carry in..whoops. Here's what's inside the box: cake mix, frosting mix, and a pastry bag. I love the idea of including a pastry bag. For those that who don't bake as a hobby and don't have one on hand it's great news...and for those of us that do it's just one more bag we don't have to replace! :) 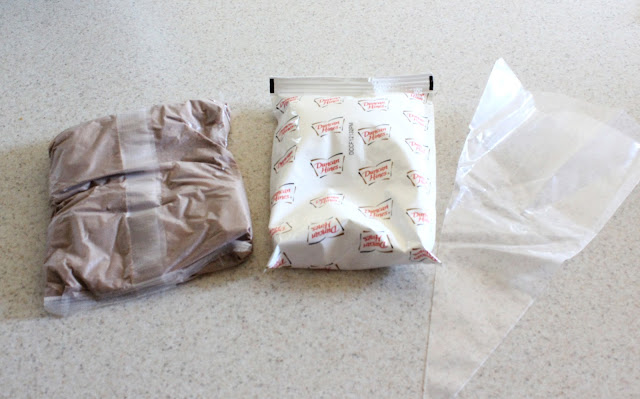 For the cupcakes I mixed them up exactly as directed, I always try things once before altering. I can honestly say that came out perfect...and I don't think they needed anything else! 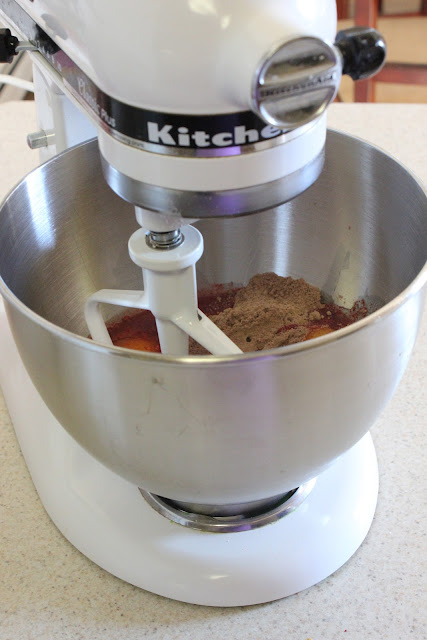 I used my normal 3TBS for each cupcake, which was the perfect amount. Remember this is a cupcake mix so it only makes 12. 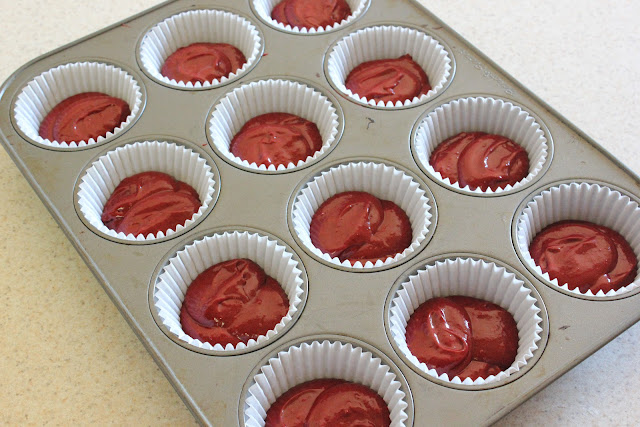 Then I baked at a 325 degrees for 14 minutes. I often bake cupcakes at 325 because I prefer how they rise with a lower temp. These little guys perked up like perfect little cupcakes. 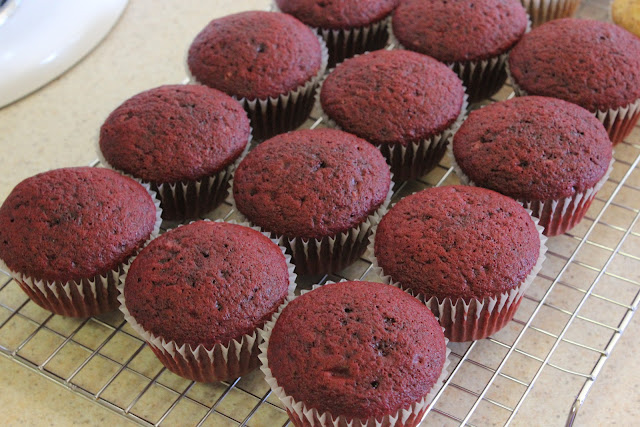 Now for the icing, which I did alter. The instructions only require you to mix in 1 stick butter and water which I did try at first. But I could tell just by looking there was no way that amount was going to ice all 12 cupcakes for me let alone fill as stated on the box. Also it was a little sweet for me. My very easy solution was to add in one 8oz box of cream cheese. Perfection! It gave it much more of a cream cheese flavor, cut down on the sweetness, and made it stretch much farther...win/win to me :) 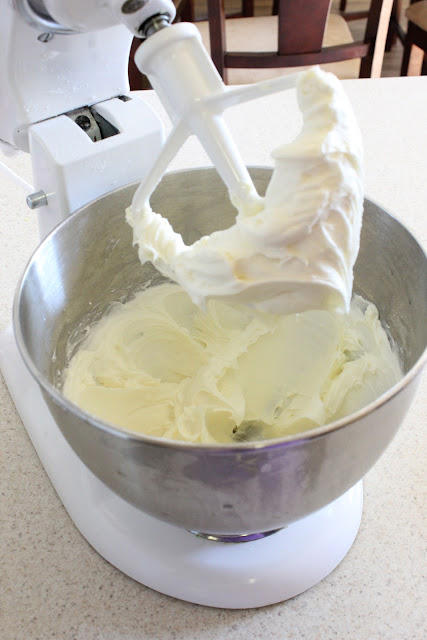 I should also add this product is made to also fill the cupcakes. In order to do that you simply fill the icing bag provided and cut a  small amount of the tip the stick in the cupcake and apply pressure and fill, then ice in a swirl. When I fill cupcake I generally fill it with somethinng different from the icing so I skipped this step and iced them regular. Of course however you'd like to do it will be fine....really I've never had somebody refuse a cupcake for too much icing.

So that's it! Super simple cupcakes and icing right from a box. My taste tester reviews were awesome! But don't just trust me...go try some yourself! 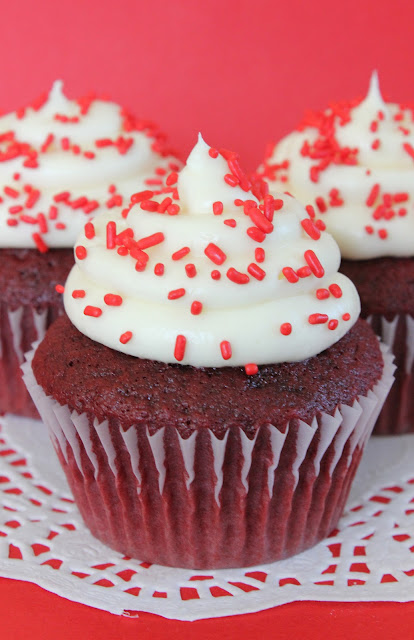 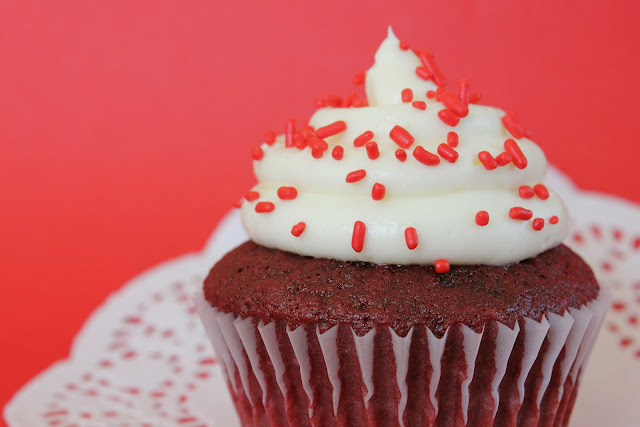