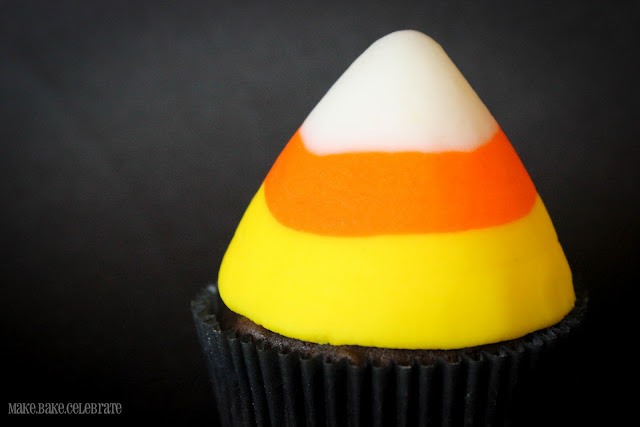 Day three of Candy Corn Week!! You know the week just wouldn't be complete without some cupcakes, so for today I'm sharing how to ice cupcakes to look just like candy corns. I first made these last year and they were a huge hit seemed like everybody wanted to know how I got the shape. So I'm back this year to share. Sure it's been a whole year but think of it as building anticipation...or something. ;) 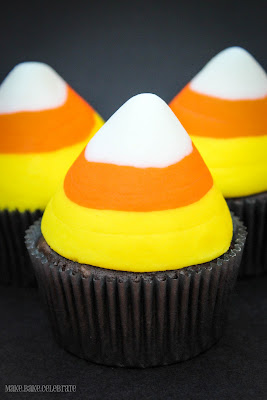 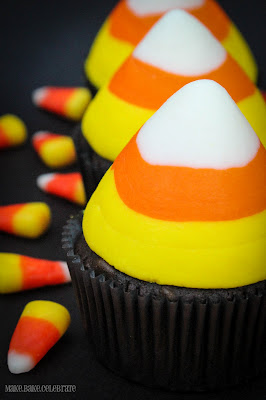 Of course I could have just iced them in three swirls of the colors and called it good but that's just not my style...always needing to make things just a little more complicated then they have to be or so the hubs says. Plus, I really like how these take on the actual shape on a candy corn, they are really fun! A giant soft candy corn on top of a little cake...what's not to love really! It's really much easier then you would probably think...

You can use any semi stiff buttercream I used the same one I posted here. Once batch will ice about 24 cupcakes or a half batch for 12. You're also going to need yellow and orange gel coloring, a pipping bag with a large round tip (3 if you have them), and a few sheets of Viva paper towel.

Step 1: Spoon your icing into three bowls each one getting a little more then the last. There's no exact measurement here just remember your going to be using less orange and a lot less white. I just kind of eyeballed it. 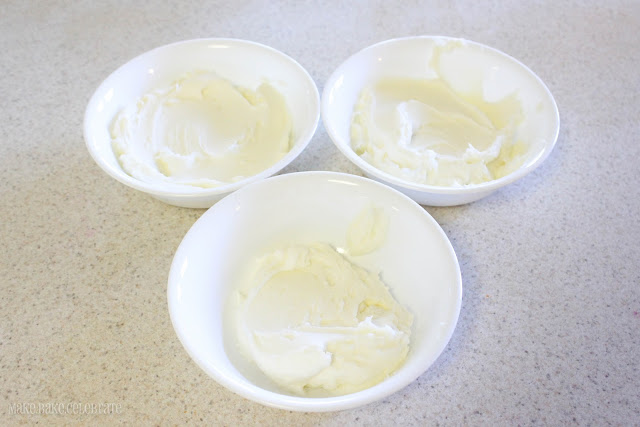 Step 2: Dye the bowl with the most frosting yellow and the second most orange of course leave the white icing white :). 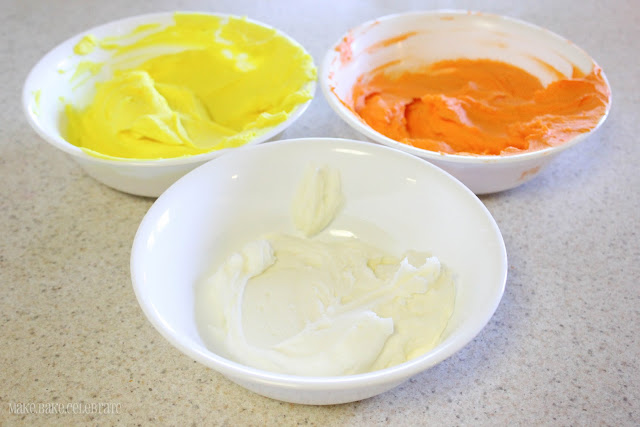 Step 3: Now fill a pipping bag with yellow frosting, you will need a large round tip. I used wilton #2A. If you have three of these you can go ahead and fill all three. If not no worries, you will just have to wash after each color, 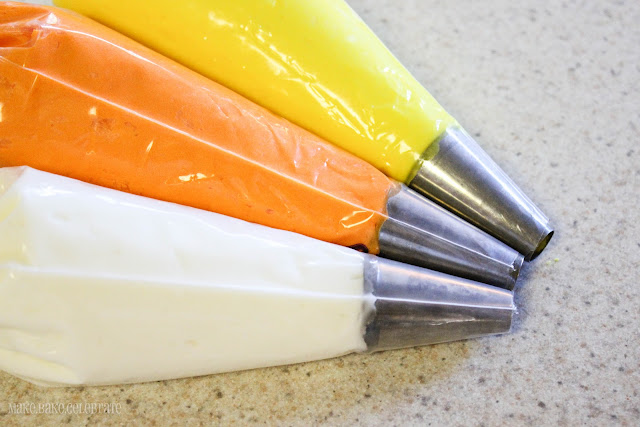 Step 4: First pipe a "blob" on to your cupcake and a outside ring, do this twice for the yellow. 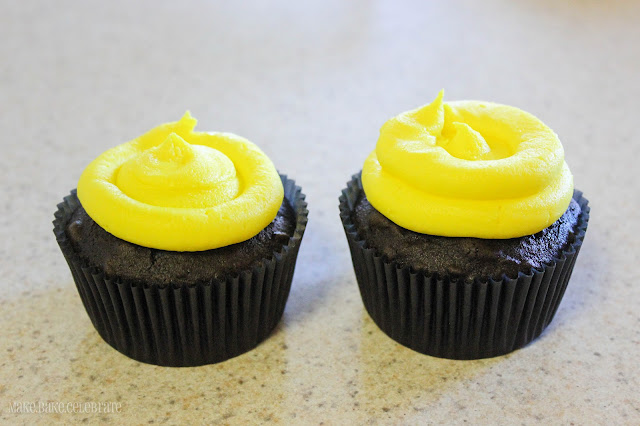 Step 5: Now pipe a double swirl on top of the yellow, slightly smaller in width then the yellow. You can just swirl this like how you might normally pipe a cupcake. 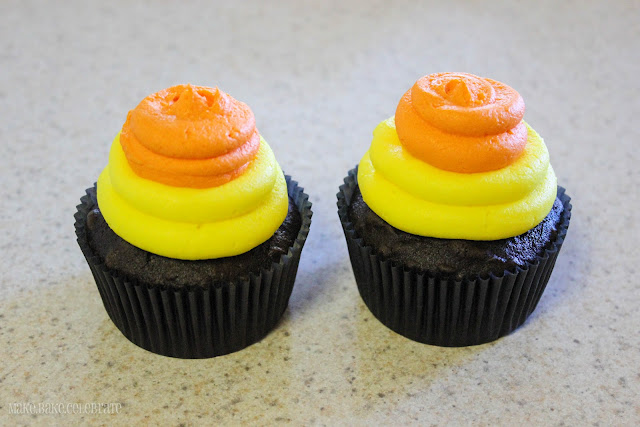 Step 6: Now pipe a simple dot on top pulling up while releasing pressure. Really you could stop here cause these are pretty cute too...but now were going to shape them. 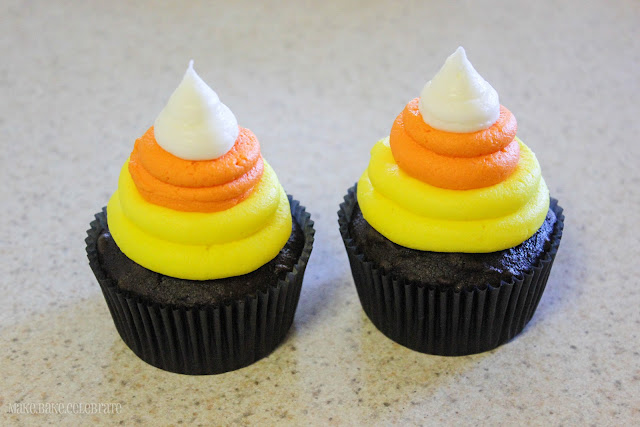 Step 7: Using a clean piece of viva towel gently lay the paper on the cupcake and very gently smooth out lumps with your finger on the other side. I did so by using the side of my finger going up and down.You can slowly lift and move the towel around the cupcake to smooth out the whole thing. You will need to use a clean sheet of Viva every few cupcakes. Just remember to be gentle so you won't damage the icing or pull down the colors too much. 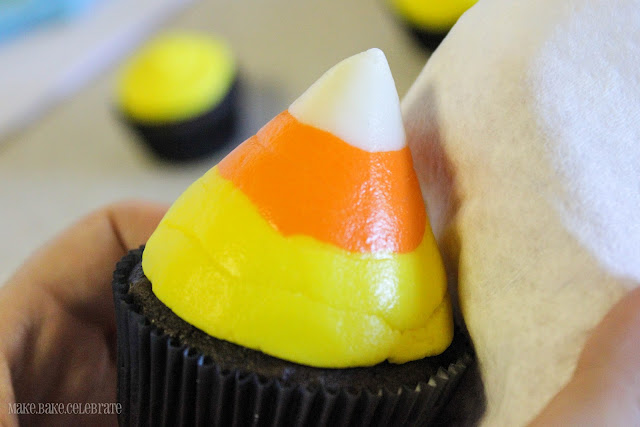 It's really not an exact science, something you just have to try once but I promise it's not hard! Also these would make great mini cupcakes...you could just pipe on dots for each layer getting smaller each time.

The hardest part about these is figuring out where to bite them first? 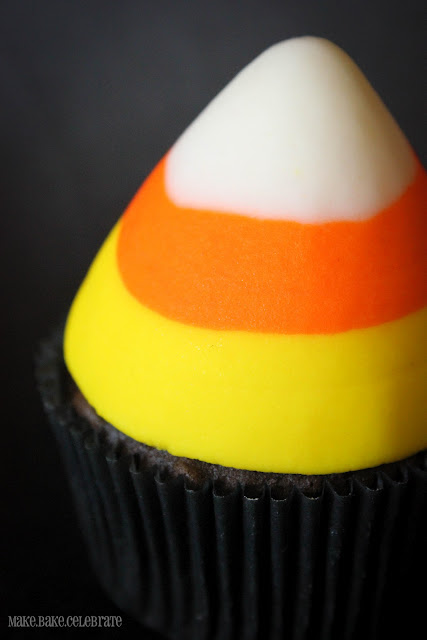 That's all for today! I'll be back tomorrow with more of the white, orange, and yellow stuff...don't miss out on the fun! Like MBC on Facebook for all the latest updates and maybe just maybe a little end of the week giveaway on Friday, and share with your friends because I'm pretty sure they like candy corn too ;). 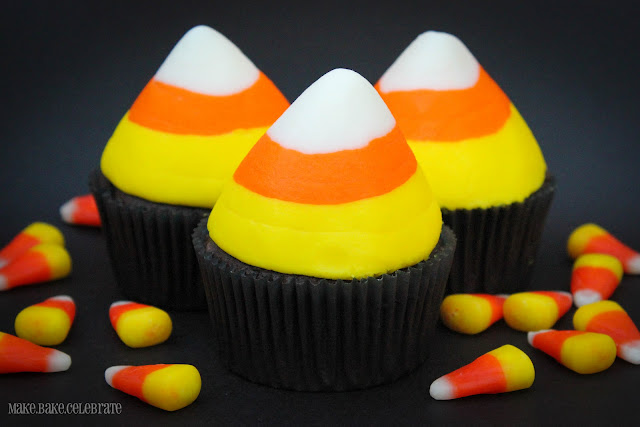